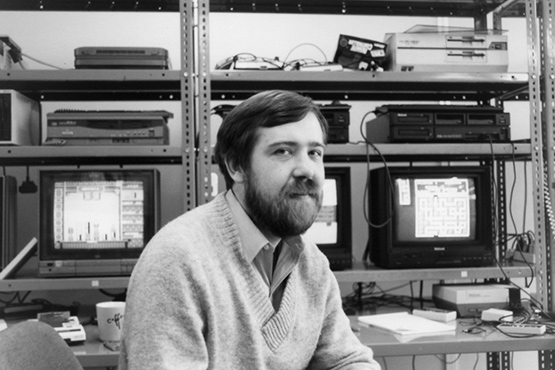 Ever since Alexey Pajitnov created Tetris in 1984, this puzzle game has continued to evolve by leaps and bounds (and inspire quite a bit of copy-cats), but even with all this, the core concept of what made Tetris great still remained intact, and fortunately for many users the world over, this is a very good thing.

And when the Nintendo DS came along, an opportunity presented itself for bring Tetris to it but in a very distinct way, namely with the Nintendo formula added to it.

The end result? A game that not only has the classic Tetris gameplay, but with some wrinkles to keep you coming back for more.

For starters you’ll notice that the characters from some of Nintendo’s well-known franchises are in the background.  While it would be easy to think that they were just placed there just as nostalgic eye candy, that’s not the case.  In many of the game modes the characters are placed in such a way that they reflect how you play, and this is quite prevalent in the modes you select.

And speaking of modes, they are quite ingenious. For example, the “Catch” mode requires you to catch the Tetris pieces called “Tetriminos” to form a 4 by 4 square and then detonate it.  In the midst of this you also have to make sure that your energy doesn’t run out or that the blocks don’t stack to the bottom or top because if any of those things happen it’s game over.

With “Mission” mode there is an objective you have to complete before your supply of hearts run out.  But don’t get too comfortable, because another mission will pop up once you complete another.

In “Puzzle” mode you have to clear the screen of Tetriminos.  However, there’s a catch: you can only use the Tetriminos provided for you, so you have to get very strategic with this.

“Touch” is the classic Tetris gameplay formula, but you use the touch screen and stylus to move and rotate the Tetriminos.

And finally, “Push” mode has you going up against the CPU in an effort to push your opponent down and not let it get up top to defeat you.  One way to help is to clear 2 or more lines to keep your opponent down. 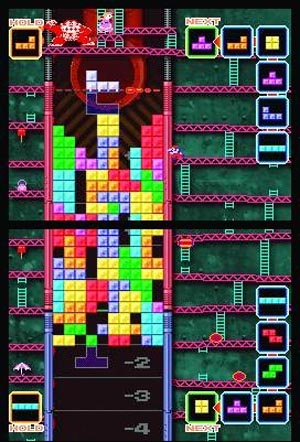 In all, if you are looking for a good Tetris game with something distinct, then this is a game worth tracking down and adding onto your DS library.  Besides having the Nintendo sprites in the background, there’s plenty of modes to grab your attention.  And in keeping with true Tetris tradition, it’s something you can play for a few minutes or for a very long while, and it never gets boring at any of those points.