Raygunn here, and do I have a treat for you today! One of the gifts I received form my lovely wife- was the book “Pac- Man Fever”. So, while I’m in self isolation in the Archives Bunker, I thought I would do a Video Review of it!

Let’s just say… I liked it. A lot. Don’t believe me? Well, check out the video yourself. and see how many times I say “amazing”. Check it out! And if you want a copy for yourself (or your Kindle) Check out the Amazon page for more info! https://www.amazon.com/Pac-Man-Fever-Unlikely-Defined-Worldwide-ebook/dp/B0812CSQM7

On with the video!

…And thank you, Mr. Bucker, for all the awesome memories!!! 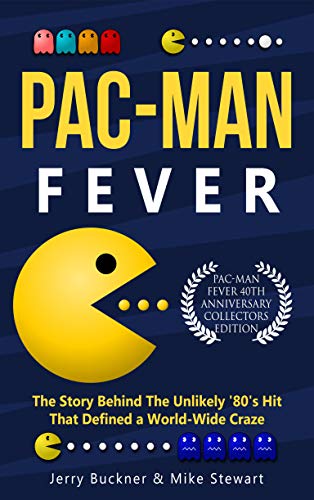 about a project he had been collaborating on with Mike Stewart  for some time now, That was just released on Amazon’s Kindle E-Book service. The Amazon Page states-

“If you’re a child of the early 1980s it is likely that you were consumed by the ubiquitous Pac-Man video games that seemed to be everywhere at the time.

The game not only spawned a worldwide craze but a million-selling gold record for the Buckner & Garcia duo called “Pac-Man Fever”.

In so many ways, “Pac-Man Fever” became the soundtrack for an era and the unofficial theme song of one of the most popular video games in history. This book captures the story of that song and history that led it to be the unlikely smash hit of 1982.

This eBook is specifically designed for fans of the song, the Pac-Man game, and the 1980s. The stories in the book were derived primarily from interviews and conversations with Jerry Buckner.

Not only will you read about the history of the music but we’ve included exclusive and extended Pac-Man Fever downloadable tracks of the song (including a karaoke version) as well as sheet music. Also included are never before seen behind the scenes photos and links to videos and other exclusive multimedia content.

Get the story behind the unlikely ’80’s hit that defined a worldwide craze in an exclusive digital music e-book commemorating the 40-anniversary of the Pac Man video game.

This is a digital music ebook which means you get…

* KARAOKE! You also get the karaoke version plus lyrics so you’re ready to perform!

* SHEET MUSIC! Get your band together to play Pac-Man Fever!

* BEHIND THE SCENES! Get exclusive video content behind the scenes and how the song became the anthem for one of the most popular video games in history

* SUPER-FAN! Get the inside story of how Pac-Man Fever became a worldwide hit a 80’s pop-culture fixture

If you want to enjoy and re-live music from the 1980’s, have fun singing Pac-Man Fever karaoke, and/or play Pac-Man Fever with your band… then this is the most important digital music e-book you’ll ever purchase!

So- You get history of the making of the arcade anthem of my generation, AND… THE PAC MAN FEVER ALBUM on MP3 to boot!!!

I’ll pick it up this weekend and do a review in the next few weeks!

Click HERE to go to the Amazon page and get yours TODAY!!!

Fans making songs about their favorite games on YouTube is common place now. However, back 30 years ago that was almost unheard of. That is until an album came out called Pac-Man Fever by Buckner and Garcia. These guys created a wonderful soundtrack dedicated to the arcades that were super popular at the time. But not because they wanted a pay check (although I am sure it helped) but because they were fans themselves of the games that they sang about. Even going so far as to fill the lyrics with tips on how to play the game. Just recently Jerry Garcia along with Jace Hall released a new remixed version of their classic song. if you haven’t heard it yet it is awesome and I will put the video at the bottom of the post. If you like it you can even get a free download of the song (click here).

Pac-Man Fever. The arcade album that all Arcaders memorized. It was our soundtrack. Someone finally went into the arcade, and were singing to the world about it.  Buckner and Garcia were talking TO US…. But they weren’t the only ones.

In 1982, John Lombardo and D. J. Michaels, with some studio artists (as the story goes)  record “Get Victimized”  under the nom de plume R. Cade and the Video Victims.  Released by Arrival Records, the album cover features some interesting artwork, ( aliens playing games with us as the “victims” in the game)  and as the cover boasts, there is 3 foot poster of the album art! Well I have always had my copy of “Pac- Man Fever” but not this jem… until now! 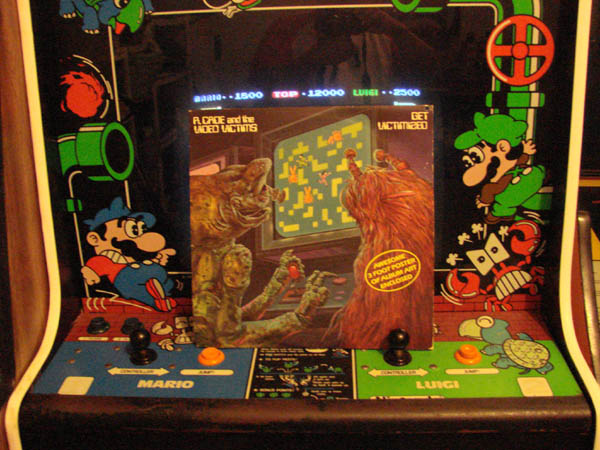 I finally got my copy of this long lost (and highly sought after) album off  Ebay  just before Christmas (yea, me!) and I thought I would review the songs. Just how good are they?

1-Victim Of The Video

Here’s the first of the arcade “anthems” on the album. It’s about an ordinary guy getting hooked on video games, and what it does to him. I dug it. It’s not my favorite, but it speaks to me about what all of us Arcaders already know- once your hooked, your hooked for life! And if anyone ever did a movie about arcades in the 80’s ( Joysticks 2, anyone?) this could be on the soundtrack. I would say that this could be the theme song, but I think that distinction is for another song on the album. But I like this one. It’s haunting.

I like this one! I love the game- It improves on Berserk in so many ways, and this song puts you in the middle of it! The one song I was always disappointed with on Pac- Man fever was Berserk. I sounded like a love  song. This song completely redeems it! If Coleco had used this song in the commercial for the Frenzy cartridge, they would be selling Colecovisions today (no joke!)

This one’s just… CREEPY! Now, don’t get me wrong, I think we all get where they were going with this one (A guy falling in love with a video game) , but it comes out like a theme song for that weird guy hanging out in the arcade with kids 10 to 15 years younger than him, offering tokens to the ones he “likes”. EWWW… I just creeped myself out! (YUK)

This was the one song I felt was a waste. They couldn’t top Buckner and Garcia’s version, so why try? For filler. I would have chosen anther game (Mr. Do! perhaps?) This song just stinks!

Now, this is the theme song!!! OUR THEME SONG!!!!! Everything about it is a fond memory of what is was like living in 1980’s – in the one place were WE belonged! Like I said before, If the powers that be decided to do a movie about the arcade lifestyle, this is the song to start out with! I play this one in the Archives often, and it makes me smile every time I hear it! You know who you are… YOUR A VIDEO STAR! so play!

6-We Fell In Love At The Video Arcade

This ones…Ok. I guess I guess its the couples skate song on the album. I think this has happened to all of us while playing- wanting to impress that girl or guy next to you, but it could go the other way at any moment and be another “VIDEO MAGIC” situation….EWWW… I just creeped myself out again! (YUK)

Here’s another filler song… It just doesn’t feel like the game its talking about. Defender is a strong, fast moving game, and this song doesn’t reflect it. if you want a good Defender song, listen to “The Defender” on the Pac- Man Fever album. This could have been a good “anthem ” song if the they had changed the topic. Like if the song was about  a kid coming in to the arcade for the first time, and wants to be the best player in the room. Kinda like “Jukebox Hero” of the arcade! “Arcade Contender”- has a good ring to it!

Finally, A song about someone WHO WORKS IN THE ARCADE!!! This is a good song! Catchy, fun, it even has change SOUND EFFECTS!!! Working in the industry, I can tell you, this song is exactly what it was like working as a change attendant! AWESOME SONG- BEST ON THE ALBUM!!!!!

This is  a great song on the album.  I like that R. picked a game that didn’t have anything written about it before. Like Frenzy, It’s very descriptive and action packed, and would have made a great commercial theme song if say, Coleco had made a home port of this great game! Give it a listen!

I’m glad they went out on a high note with this song! Very original on its own, while giving props to Pac- Man Fever itself! It too has original sounds from the game, background chorus, great lyrics, and feels as polished as the song that put Buckner and Garcia on the map (This should have been the one that was on the radio for these guys!) It makes a great companion to the original Pac- Song… just like the games do!

So, after hearing all the tracks, what do you think? Well I tell you what I think…. It’s a great album! Given these guys probably had a limited budget, with no corporate backing in sight, and limited release, I think they did a amazing job! and with only two real stinkers on the whole album! I have to give them props in originality as well. The idea of have several songs on here not really about any specific game but about the culture itself- what it was like to be in the arcade, playing or working there.  In that spectrum, they really caught that moment in the 80’s perfectly! And a three foot poster to boot! Do yourself a favor- get this one if you can! 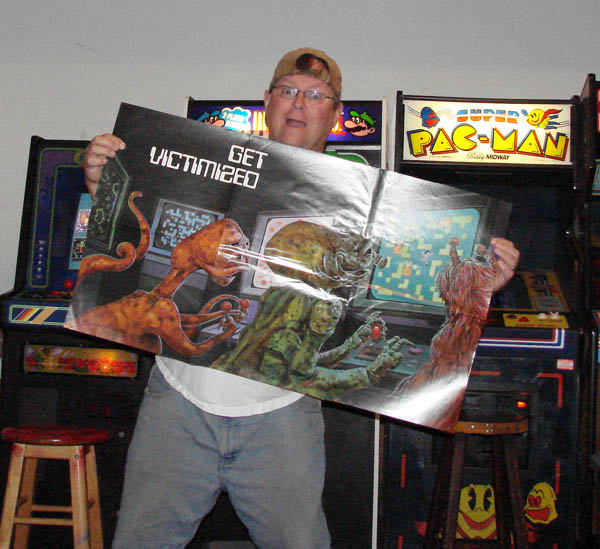 Can Ya Believe It?