In the early days after Donkey Kong was released to the world, there were a lot of arcade and home console companies that wanted in on the Kong sized profit! This series will focus on these lesser known games. weather it’s an original game, or a Kong bootleg, we will be touching base with these games that Kong forgot!

This time, we’re going to talk about the first of two games that began the life of a software company- one that had more success in the home market… and we will get to that later. but let’s get started with one of the TWO arcade games they did- ARABIAN!

Arabian is a platform arcade game created in 1983 by Sun Electronics and published by Atari Inc. The player assumes the role of an adventurous Arabian prince whose goal is to rescue the princess from her palace. During his quest, the prince will sail seas, crawl through caves, and fly magic carpets.

First things first- Atari did an amazing job with the artwork for this game! All of their cabinets in the late 70s and early 80s were works of art, but this one stands out!

Now that we have seen the cabinet and it’s awesomeness, and some playthrough footage, Let’s look at the levels, shall we? Level description via Strategy Wiki-

The Arabian Prince begins his journey at the bottom of a ship from which he must work his way to the crow’s nest at the top of the mast by the time the vessel sails into shore. As he climbs up the rigging, Crows and Blobs dive at him in an attempt to knock him down. The Prince’s only defense is to kick them out of the way. He must also collect the bags of gold holding devilish genies who bring him more trouble. The genie can appear at any time and throw orbs of energy at our hero. However, as long as the genie has not materialized, the Prince is safe to collect the bag. Once a genie has materialized, the Prince’s kicking power cannot be used against this foe, so he must be avoided.
Each bag is marked with a letter. If the Prince can collect all of the bags in the correct order, he will spell the word “A-R-A-B-I-A-N” and be awarded a 4,000 point bonus. The player can still complete a wave even if he is unable to collect the bags in the bonus award sequence. Also note that it is safe for the Prince to fall from any height, so one set of sails can be reach from the other by jumping or simply by falling.

Now the Arabian has arrived on shore. The only way to approach the tower where the Princess awaits him is to crawl through a cave under the cliff. Undaunted in spirit, the Arabian proceeds to do just that–crawling under low-hanging rocks and climbing vines. He must still dodge Crows and Blobs as well as energy orbs pitched by the genies. The Prince can still use his mighty kick while hanging from a vine, but he is powerless when he crawls. And he must still collect the bags spelling “ARABIAN” in order to get the bonus. Eventually, he reaches the top of the cave and climbs out onto the trunk of a tree.

The next obstacle for the Prince to overcome is to scale the walls of the castle. As flying carpets whiz by, the Prince must jump from one to the next, taking care he isn’t knocked off his present perch by another carpet flying too closely. He can duck to avoid them, but his timing has to be precise or he will take a tumble down to the ground. Some of the carpets fly by the bags which he must try to snatch in the passing. And lo and behold, he is still being tormented by the same meanies–Crows, Blobs, and Genies. En garde! Sometimes a pair will merge into one Super Crow or Super Blob.
The most essential skill for the Prince to develop is the proper timing of jumps from one magic carpet to the next. If the jumps are too soon, the Prince will miss the carpet and (safely) fall. If the jumps are too late, the edge of the carpets curl up, preventing the Prince from jumping on board. 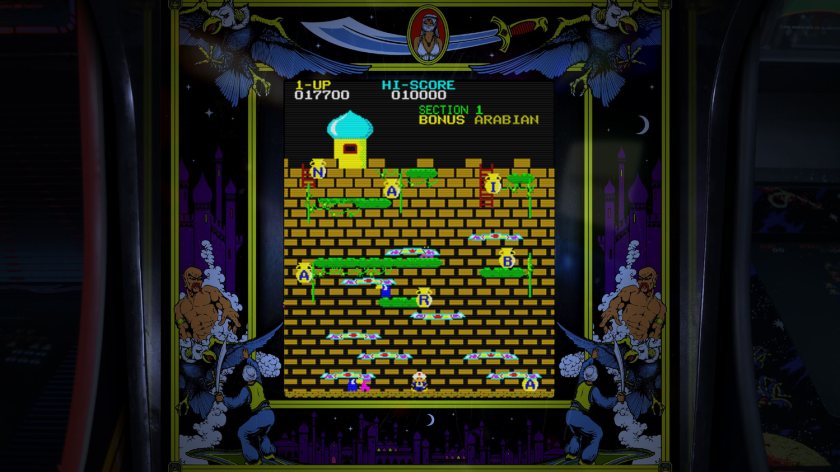 Now the Prince has entered the castle. The final stage is a test of all of the skills that the Prince used to get here. The Princess beckons him from high in the tower. In order to reach her, he must first ride atop some flying carpets and then pull himself up some ropes–all the while avoiding the meddlesome Crows and Blobs and collecting the bags of gold. Finally, he reaches his loving and grateful princess and–true to any great tale of romance–the two fly happily into the sunset on a magic carpet to the exotic rapture of the musical accompaniment.
Once the player has taken the Prince through all four pages, the story begins again except that the action gets faster, the genies become angrier and fling more orbs, and the Crows and Blobs increase in number. Even the bags of gold are rearranged so that it becomes more difficult for the player to spell “ARABIAN”. 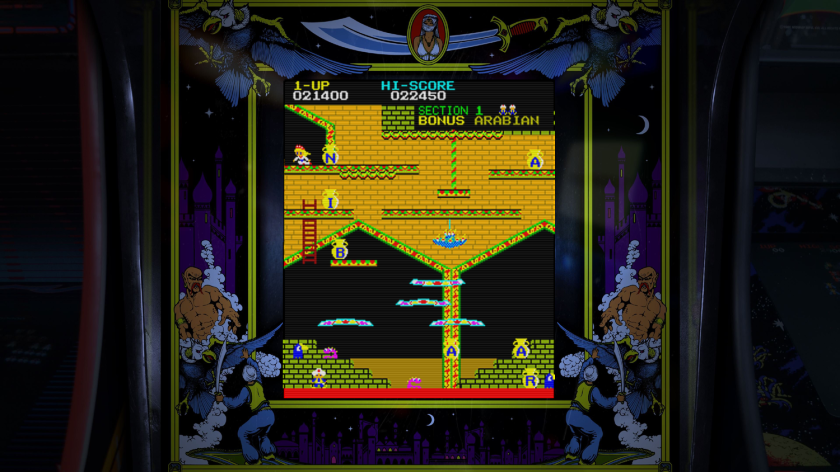 Quite the tale, eh?

This game was ported to quite a few systems- Including the NES (which is harder- you have different words to spell!)

And the awesome HAMSTER arcade port to the Nintendo Switch!

So- there are LOTS of ways to check out this amazing game. have you ever played Arabian? have any tips and tricks? let us know in the comments!