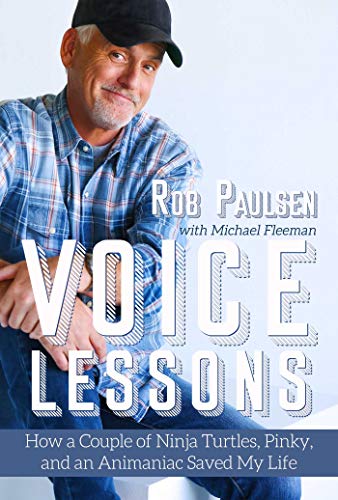 When it comes to most Autobiographies/Memoirs, one can always come away with them with a sense of “If you’ve read one, you’ve read them all”.  Aside from some notable exceptions out there audiences tend to expect some degree of embellishing when reading these types of books.  However, this book is very different from the pack.  While it isn’t the first autobiography from an actor – let alone the last – what makes Voice Lessons different is that is a book written by an actor that very few people would recognize on the street.  The reason for this is because Rob Paulsen is a voice-actor.

Now what exactly is a voice-actor?

Well, it is the title for an actor/actress who does what they would usually do – portray characters but the difference being that the actors themselves are not on camera.  Instead they are behind a microphone, with their scripts on a music stand.  Now this isn’t a novel concept, given that the history goes all the way back to the 1930s/40s with radio shows.  Then as cartoons began to emerge actors from said radio shows found themselves segueing into that and were able to bring life to characters that would become legendary, with Mel Blanc and June Foray being the most notable ones.

Then when the 1980s came around a surge of cartoons designed for syndication (around 65 episodes) began to be made.  As such this opened up more opportunities for actors, and for Rob Paulsen, this is where he came into prominence after having had a few stints in some live-action roles (Jack-In-The-Box commercials, MacGyver).

From starting out in G.I. Joe as the voice of Snowjob, to Transformers G1 and then several characters in the now-classic Disney Afternoon shows, Rob Paulsen had truly found his niche in show business.  And when he was offered the opportunity of auditioning for an animated series based on an indie comic called “Teenage Mutant Ninja Turtles”, Rob would find himself being a part of not just a great show, but a phenomenon.

As the voice of Raphael, as well as some incidental characters, Rob along with Cam Clarke (Leonardo), Berry Gordon (Donatello) and Townsend Coleman (Michelangelo) would bring life to four heroes in a half shell for many years to come.  And for kids – myself included – that was fine by us.  From merchandising of all types to especially video game adaptations and a hit film that would hit in 1990 (of which Rob and the others weren’t a part of sadly), as well as the actors doing vocal “appearances” via charity calls and the like, Ninja Turtles proved to be one of those moments in pop culture that transcended beyond what it originally was. 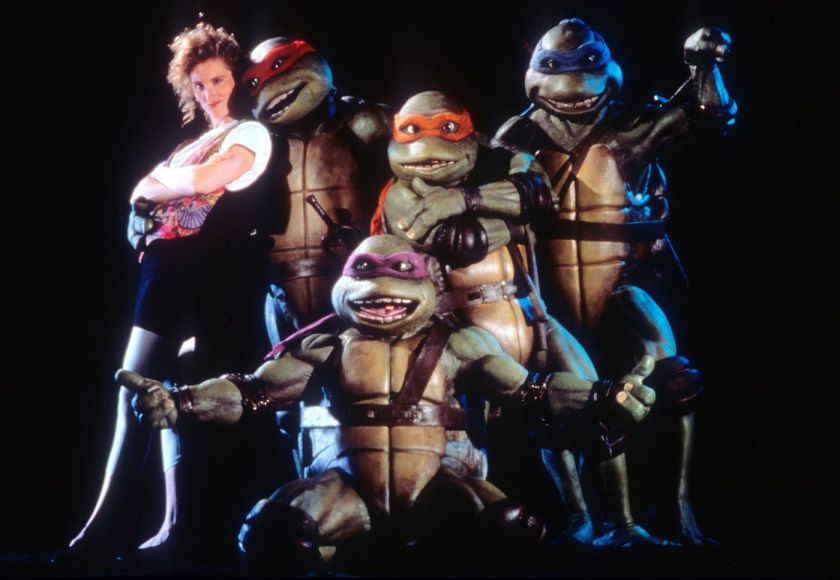 But as totally awesome as it was for Rob, more great moments would come as the 90s came around and Paulsen found himself cast in more great shows like Tiny Toon Adventures and especially Animaniacs.  And interestingly enough, Paulsen would even find himself cast as Stanley Ipkiss in the animated version of The Mask.

But beyond all the animation work that kept coming during this time, what makes this book special is also the other moments that Rob went through, both from the beginning of his acting career to the slow time during the late 2000s when Rob wasn’t getting much work.  While his voice-over career would kick back up again – from “Tuff Puppy” to being cast in the new iteration of “Teenage Mutant Ninja Turtles” in 2012 as Donatello, as well as starting up a podcast of his own named “Talkin’ Toons” which took off magnificently – Rob would face his greatest challenge in the form of throat cancer, which he more than highlights in the book.  While his battle with cancer is something only those who have either gone through it or seen family members/loved ones go through it can understand, you still are able to empathize with him in those moments as much as you can, and through it Rob details every stage he went through – from his initial gung-ho attitude to fighting cancer, to the times when he couldn’t even keep a glass of water down and felt as low as ever due to the chemotherapy and other treatments.  Through all this, Rob would eventually draw on the life lessons he had learned before early on, and in a lot of cases relearn.  In the end, Rob did win his battle with cancer, and he was also able to save his voice. 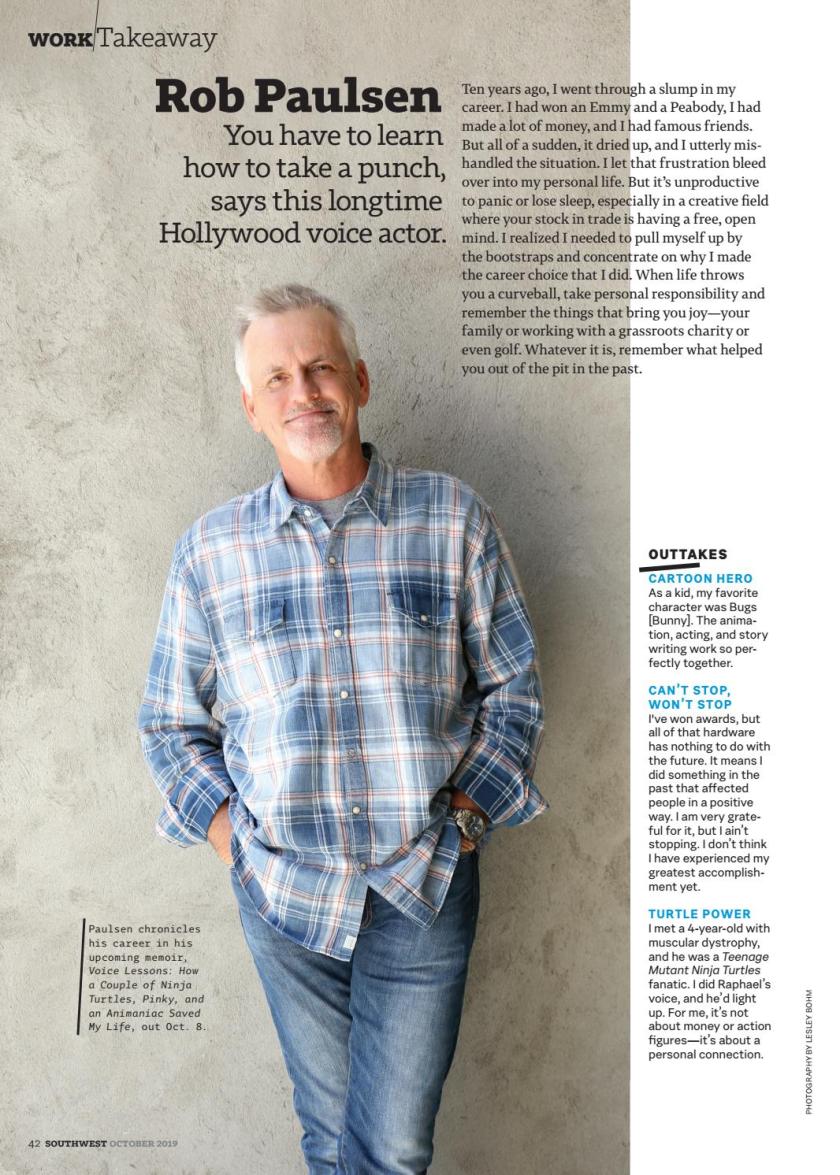 In all, this book is definitely a must to have.  And not because it’s yet another actor’s biography, but because it’s one by an actor from a different part of Hollywood.  For voice-actors the true celebrity is in the characters said actor has played, and as Mark Hamill put it best, “The character actor disappears into his role and you don’t see the actor-you see the character.”  As such audiences can connect with the character fully and yet the actor isn’t recognized for the role unless folks are looking at the credits.  Whether it be from the book itself (paperback or eBook), or the Audiobook version, I can definitely guarantee you will be pulled into Rob’s story, and hopefully you get a sense of some of the greatest gifts we have within us: The power of the human spirit, and how through all the experiences we go through, good and bad, we can all find our own voice lessons and impart them not just to ourselves, but to others as well, and in the most positive of ways.

And to finish it up, here’s a treat from one of Rob’s characters.

Available wherever books are sold, including:

And of course, Apple Books.

🚨New article🚨 Celebrating Donkey Kong’s 40th anniversary we talk about the two versions for the Commodore 64 (yes two versions)
The Arcade Archives is now part of TikTok follow us @thearcadearchives -
🚨NEW PODCAST EPISODE🚨Celebrating Donkey Kong’s 40th anniversary we share our favorite Donkey Kong memories! Listen now on theaecadearchives.com or your favorite podcatcher!
Grab your Game Boys if not your 3DS Arcaders, because @ultrasonic9 is back with an article about the underrated yet no less classic Donkey Kong for the Game Boy! #DonkeyKong40 #GameBoy #Nintendo3DS