This is a sequel I’ve been waiting for.  A sequel to one of the greatest board games ever- Dark Tower. What?  You have never heard of Dark Tower? Well, Squire- sit back, grab a cold grog, try not to get any mutton on your tunic, and I’ll tell you the story of the Dark Tower. 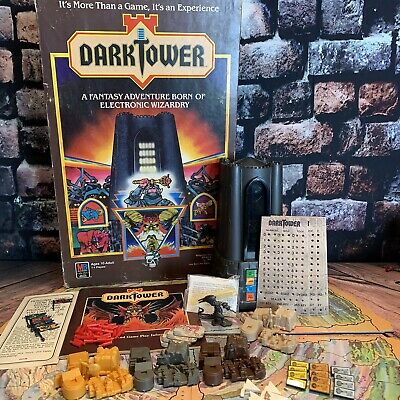 Dark Tower is a 1981 electronic board game by Milton Bradley Company, for one to four players. The object of the game is to amass an army, collect the three keys to the Tower, and defeat the evil within. The game came out during the height of the role-playing game craze in the early 1980s. Advertising for the game included a television commercial featuring Orson Welles.- Wikipedia

As a avid D&D player- I wanted this game. but it was pricey for a board game in that day- $40.

And that year, it was either Dark Tower- or the Atari VCS. I think we know what I chose.

I always WANTED this game- But today, a working version of a almost 40 year old game can fetch $100.00 or more.

Let’s take a look at this game in action- you will see what the excitement was about!

You can EVEN PLAY THIS ON STEAM!

Well- That is the History Of Dark Tower. But what of the sequel- Return To Dark Tower?

Would you pay hundreds of dollars for a board game? Even as cool as this one?

Let me know in the comments!