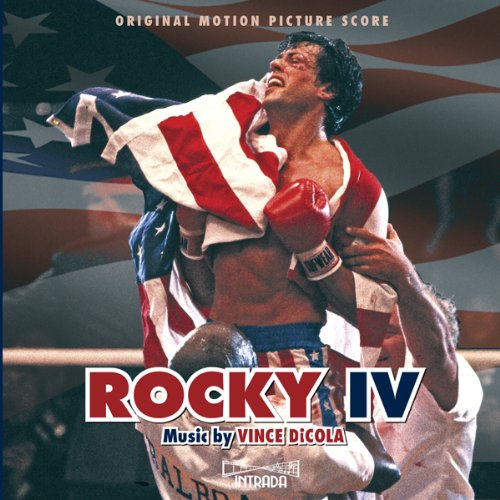 There is a lot to be said in music and how it can be used in defining something, whether it be in TV, Movies, or even video games nowadays. Even with the best scripting, directing and performances by the cast, the one thing that can make or break the project is the music itself, and whether it can convey exactly what the project is about. This is a challenge that all composers have had to face, and Vince DiCola was no exception. An accomplished percussionist and pianist, DiCola had begun as a session player for artists like Juice Newton and Cheryl Lynn. However, it was in playing with various bands in Los Angeles with Frank Stallone that the composer would find himself helping Frank on writing some songs for the movie “Staying Alive”, which the latter’s brother Sylvester was directing. As a result, DiCola would be nominated for a Grammy, which would then lead to Stallone hiring him as the composer for the fourth film in the Rocky franchise, since Bill Conti was busy composing music for the first two “Karate Kid” films at the time.

Right away with the score you felt that this was something quite different from what had been done before with the Rocky films, for while there was still some orchestration in certain parts, the majority of the music had more of a vibe that matched the more glossy, tightly-edited feel of the rock videos that were dominating MTV, and it showed.

To start off, you have the Rocky theme, “Gonna Fly Now” arranged in a still familiar, yet new way, and the three most notable themes to fans, “Training Montage”, “Up The Mountain”, and “War”, the former two being the most noteworthy of workout songs to fans the world over.

In addition, there is also “Drago’s Suite” and “Drago’s Entrance”, which both give a sense of Ivan Drago being an even more menacing foe than what Apollo Creed and Clubber Lang were.

A couple of other notable tracks are “Anniversary” and “Rocky and Son”, which balance out the more fan-fare, bombastic tracks and sinister tracks with more intimate themes that harken back to Bill Conti’s composition with Rocky and Adrian’s love story, as well as Rocky’s relationship with his son Robert.

And finally, you have “Knockout” and “Victory” to tie up the score, with the latter being yet another Conti composition retooled into an incredible arrangement to match Rocky’s win over Drago, as well as his speech at the end.

On the one hand, it was nice to step into Bill Conti’s shoes after he scored three Rocky movies, because I had a template that I didn’t want to stray too far from, and because I’d worked with Sylvester previously, I also knew that he was going to give me some latitude to go in my own direction.

Not only that, but the success of the film opened the door for DiCola to work his composing magic yet again when he was hired to compose the music for “Transformers: The Movie” one year later, And this would be yet another music score that would become well-beloved among fans.

But perhaps what makes the Rocky 4 score so memorable is that it is very distinct not only from what had been done in previous Rocky films, but from other films in a sense that it showed that there was more than one way to compose music for movies, and it didn’t always have to be in an orchestral, symphonic way. And in a time where orchestrations seem to sound almost alike in some respects, it is good to see that there are composers who are willing to try new things as opposed to what is expected, even to this day, and one can hope that there are other aspiring composers who pick up on this and utilize other means of composing.

@ultrasonic9 is back with a new article that touches on a lost arcade game of Nintendo’s-Radarscope. #Nintendo #RadarscopeArcade
Hey Arcaders! It’s Friday Night Are you tired of reality television Or another murder mystery?
Arcaders, which #pokemon game are you most excited about?
Join @raygunn1981 , @ubernerd527 , and @ultrasonic9 as they discuss the latest #nintendodirect and the upcoming #supernintendoworld at #universalstudiosjapan