In my life, before Buck Rogers in the 25th Century, Star Wars, SPACE- 1999, Logan’s Run, Silent Running, 2001- A Space Odyssey, even before Lost in Space, I watched and gravitated towards Star Trek. as a young child, I just had more images of it burned into my memory circuit than any other TV show when I was young. I can honestly say, it shaped me in the beginning more than anything else at that age- into the RayGunn you know and love today. And with the passing of Leonard Nimoy yesterday (as of this writing) I had to take a moment and write something about this man and how he helped shape my life.

I fondly remember watching this show as early as the age of six ( it was always on WPIX channel 11 up in my home town. ) My favorite episode has to be “Amok Time” where Spock has entered his “pon farr” (mating season for those unfamiliar to the Star Trek universe) and has to go back to his home planet of Vulcan- just when the Enterprise is supposed to go to to Altair VI in order to be on time for the Planetary President’s inauguration ceremony. once there, Kirk get directly involved to try and help his friend, things take a turn for the worse. Trouble starts when T’Pring announces she would rather not marry Spock. T’Pring invokes the kal-if-fee — her right to have Spock fight for her. However, she chooses Kirk as her champion, over the strenuous objections of Stonn, another member of the wedding party, who won’t shut up about his traditional rights until T’Pau commands “Kroykah!” (meaning “Stop!“) Both Kirk and McCoy (correctly) speculate that Stonn is T’Pring’s actual choice and would be picked next should Kirk decline. Fearing Spock is now too weak to fight Stonn, Kirk agrees. It is only then he is informed that it is to be a fight to the death. Who wins? for that, you will have to watch the episode on Netflix!

Oh! This was one I remember well!

For those of you unfamiliar with this, It was a show devoted to unexplainable phenomena. It predated all the shows most people remember, such as Ripley’s Believe It Or Not and Unsolved Mysteries by almost a decade! In Search of… is a television series that was broadcast weekly from 1977 to 1982, devoted to mysterious phenomena. It was created after the success of three one-hour TV documentaries produced by creator Alan Landsburg: In Search of Ancient Astronauts in 1973 (based on the book Chariots of the Gods? by Erich von Däniken), In Search of Ancient Mysteries and The Outer Space Connection, both in 1975 (later adapted into popular paperbacks written by Landsburg). All three featured narration by Rod Serling, who was the initial choice to host the spin-off show. After Serling’s death, Leonard Nimoy was selected to be the host.

They would do whole shows on one subject, instead of doing four or five an episode. subjects included- The Bermuda Triangle, Bigfoot, The Mummy’s Curse, Dracula, Amelia Earhart, and so many more!

And with Mr. Nimoy as narrator- it was in one word HAUNTING! check it out!

These shows would keep me up at night!!!!

I liked this show so much, I have the soundtrack! on vinyl! it’s awesome!

Now, don’t get me wrong- I love Star Trek 2: The wrath of Kahn as much as the next guy ( I was replaying the funeral on Youtube all day yesterday…) but this film for me resonated differently than the rest and I think for three reasons:

1) It was the first Star Trek film for crying out loud!

2) It’s designs for the ship, uniforms, and equipment was based on a failed reboot of the series that Gene Roddenberry wanted to bring back to TV ten years after the first series had started!

3) It just had that feel of an episode- see for yourself!

It still holds up today. It truly is my favorite Star Trek movie!

My last memory is really a no brainer for those of you who know me (this is the Arcade Archives, after all!)  Star Trek – Strategic Operations Simulator was a game I truly enjoyed when I was a  young adult in the arcade. It let ME BE CAPTAIN KIRK!!!! and everyone was there for the ride (Including Spock who welcomes you aboard!) The up right was nice, but look at the cockpit cabinet- she was a thing of beauty! it looked like it should have been on the Enterprise!

This thing was The Starship Enterprise!!!!! 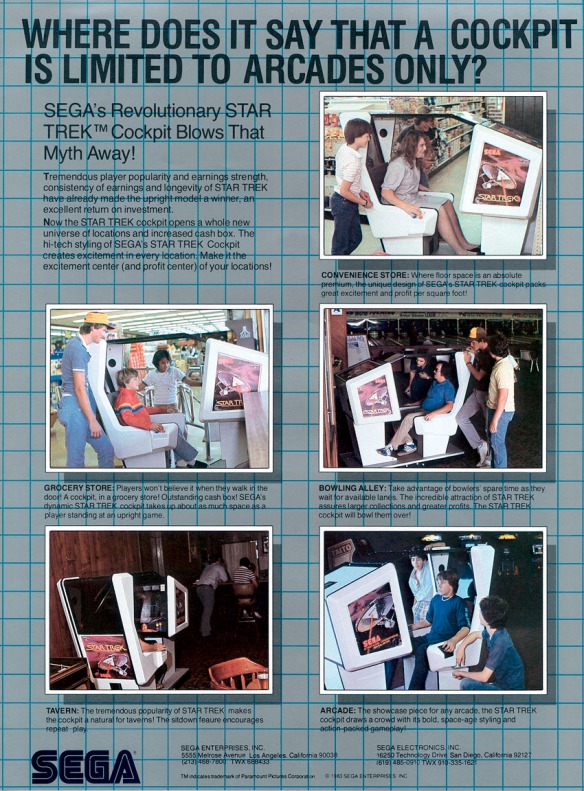 and the game- in a word- awesome!

So, to wrap this little remembrance of a man who truly help shape my early years-

We are assembled here today to pay final respects to our honored dead. And yet it should be noted, in the midst of our sorrow, this death takes place in the shadow of new life, the sunrise of a new world; a world that our beloved comrade gave his life to protect and nourish. He did not feel this sacrifice a vain or empty one, and we will not debate his profound wisdom at these proceedings. Of my friend, I can only say this: Of all the souls I have encountered in my travels, his was the most… human.

Thank you- and Godspeed to you sir.