I know you all have seen these Mystery Minis in all the stores. If not the Guardians of the Galaxy another one. This is actually the first Guardians one I have bought; it look so lonely on the self by it’s self at Walgreens, I couldn’t just leave it there.

Plus you have all these killer minis that might be in the box. I am a bit disappointed there isn’t the Collector or Thanos in this series but maybe in another series there will be. This is part of the series 1 set. I love the mystery minis not only are they cute but it’s like Christmas you don’t know what is in your box so it’s a little extra fun. 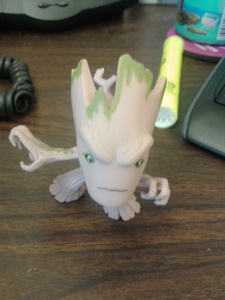 Inside the bag if you aren’t familiar with the minis is a black bag that your figure is in. I have to say when I pulled the bag out I though the figure was broken. As you can see Groot is fine; however these little minis are bobble heads! Which is epic!! I love the bobbles just as much as the regular Funko Pop Vinyls. I know some people only collect one or the other or certain series! Not this girl, I collect what I like.

Here is a shot of Groots lean, mean little booty. I love the green coloring he has it makes him more authentic. His little face is also a little bit of art work, with his lines in his face and his bright green eyes. Close up he is detailed so he looks like he has bark on.

No he isn’t broken I just wanted to show you his little bobble. You will also notice on his little feet that he has a Marvel mark as well as Funko and the year. He is fabulous. I think I’m going to have to get a couple more of these. Also I hope you all love Funko as much as I do because I have a feeling there is going to be a lot more Pops popping up!!