Christmas time is a time to be with family and friends and celebrate all that we have been blessed with. So don’t get me wrong as I post the following because Christmas is not about the gifts. However there is one Christmas I will never forget as long as I live. Now I will admit to you that I don’t have a very detailed memory. I can’t remember how old I was or what I was wearing or anything like that but I can remember the most important part. But before I go into this story I have to go back a ways before this Christmas. Around the time I was born there was a revolution that just started in gaming. For the longest time video game could only be played at arcades but for hardcore gamers it was a dream to play them at home. However, shelling out enough money for an arcade of your own could almost be as expensive as buying a car. But that all changed when companies like Atari, Coleco, and Nintendo came out with their first home entertainment systems. These were the things to have anyone who was anyone had one. As for me the only way I could play video games at home was through  my Father’s Commodore 64. But then one day my Father found an Atari 2600 at a garage sale for $10 (which included like 30 games with it). I almost immediately got hooked playing games like Pac-man, Star Wars: The Empire Strikes Back, Pengo, and others. It wasn’t long before I started to get a lot of friends and eventually started playing their NES systems. Games like Super Mario Bros., DuckTales, even Duck Hunt got my attention and just like any kid back then I wanted to have a NES. Eventually one of my friends was moving and he sold my parents his NES along with a couple of games, not to mention Super Mario Bros. 3 (one of my favorite games of all time). But when I got into fifth grade I started hearing about another game system, a kind of different game system. It wasn’t until later that I got to play this system. It was black colored and about the size of a textbook it had a circular design on the top were its logo was. In big bright shiny silver letters it spelled out Genesis.

I played the Sega Genesis at a family friend’s house for the first time and I loved it. The first game I could remember was Altered Beast. Playing a muscle-bound strong dude that could go around beating up zombies and things and got to transform into animals as well was so great. But it wasn’t until one year that the system started to get my attention. I went over to that same family friend’s house that I was introduced to the game that would turn out to almost be a lifetime obsession. The game was like Super Mario Bros. but different it was faster more colorful and the music blew my mind. It started a blue hedgehog in red shoes whose name was Sonic. It blew my mind that I could run around at the speed of light over hills and around loops and even through walls. Now I am kinda embarrassed to admit to this, but I wasn’t that good at the game at first. In fact it took me hundreds of times to beat the first boss battle but I was definitely hooked to the game. Soon Sonic became my favorite thing I couldn’t stop talking about him. It also didn’t help that I also had a friend in school who was obsessed with Sonic as well. Soon my little kid heart wanted to own a Genesis so I could play Sonic’s game all the time. 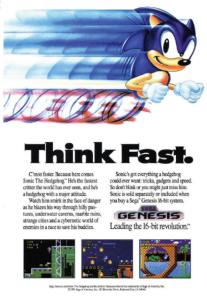 Now we didn’t have a lot of money as a family so if I wanted it (as my parents kept telling me) I was going to have to save up the money. I had a pencil box that I would put all the change that I collected and even the money that I earned in it. I was so obsessed with this idea that my friend who already own a Genesis give me a poster with the system and all its accessories on it. Just like any fan boy kid my age I put the poster above my bed and looked at it everyday. Soon I started to realize that it was going to be almost impossible for a kid to save up that much money and I started to get sad yet determined to get it.

One day, my Dad came home and started to tell me that he heard rumors of an adapter that I could put in my NES and play Genesis games. Now I wasn’t buying this but because as a kid I knew more about games than any adult would know. But my father was consistent and almost everyday would come home and tell me that he was trying to track them down. I knew that Dad was being miss lead by someone but he wouldn’t listen to me. I just ignored him and tried to think of other ways to get money but nothing came to mind and I was losing heart.

Now to that Christmas, every year we would wake up around 7 or 8 depending on my parents mood. Now my mother was Artistic and she loved setting our presents in such a way that each of us would have a pile. Now sometimes she would put them under the Christmas tree and other times would display them in the front room. She would use presents to stack  almost like Legos, presents on presents, or would even just use empty boxes. So this Christmas when I woke up and saw the presents under the tree stacked on top of a box it didn’t put up any flags. I was one of three brothers and every year we would take turns opening presents, I would start then my young brother and then the youngest brother. One of the first presents I opened was the first Sonic game. I was excited but it didn’t last long as I realized that I didn’t have a Genesis. The second present was Sonic Spinball again another high and low moment for me. I turned around and looked at my Dad asking him what the deal was. He just smiled and said that he had found a way to play them on my NES. I still didn’t believe him but I continued opening presents. The next one was one that made my heart skip a beat it was the game that I wanted even more than the first Sonic game; Sonic 2. Again this was a short victory as I remembered again how I lacked a Genesis. I gave my father an ugly look again but he just kept smiling which was starting to bug me. Soon all the presents were opened and I had three Genesis game and no way to play them. Again I looked at Dad again and asked what the deal was, he continued with the same smile. Then told me that the clerk at the store told him that these were special and all I needed to do was put it into my NES. I did but only to prove him wrong and just like I thought the game didn’t work. My mom then stepped in and said that there was one present missing and I should check the box that my presents were sitting on top. As you may have already figured out it was the Genesis. I believe that I was so excited that the rest of the day was a blur. More than likely I spent the rest of the day playing my new system. This was truly a Christmas I will never forget!

I want to dedicate this post to my parents who made every Christmas great for all of us, even when they didn’t have a lot of money. But they never wanted us to forget what Christmas was truly all about! So Merry Christmas to you and your family and have a wonderful New Year!

To celebrate the upcoming release of the game for the Switch, @ultrasonic9 has chosen a track from the original Wii version for this month’s video game boom box selection. #TheLegendOfZeldaSkywardSword #MahitoYokota #HajimeWakai #TakeshiHama #TheSky
So what did you think of the special look for #StarWarsVisions?
🚨New podcat alert!🚨 join Emily and Zoe talking Theme Parks, 80’s Movies, and Horror. Every Friday night on Twitch https://twitch.tv/ezlistening
Happy 20th anniversary to the pinnacle of the Game Boy line, the Game Boy Advance! #Nintendo #GameBoy #GameBoyAdvance20