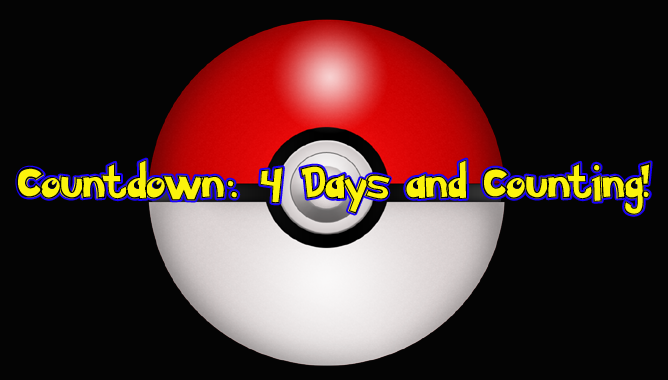 Hello gamers!  My name is Cyakokun, the newest blogger here at Arcade Archives.  I’m the youngest recruit (I’ll be turning twenty two in December), but just because I’m younger doesn’t mean I don’t have a love for all these video games.  I’m a connoisseur of many things, like kitten videos, Kpop (Korean pop music), Hello Kitty, Game of Thrones, Harry Potter, and of course video games.

And while I know that this blog is specifically dedicated to older games (after all, the header does mention the year 1981), let’s be honest: I wasn’t a twinkle in anyone’s eye in 1981.  I didn’t start playing video games till I was eleven, around the year 2002.  So I don’t have a lot of experience with some of these older games.

But there is a franchise that is still kicking butt that I love.  A franchise that will release its newest game in, you guessed it, four days and counting.  And what is that franchise you ask?

Guys, I can’t even begin to tell you how much I love the Pokemon games.  I still own my very first Pokemon cartridge (Crystal represent!!).  And I am sitting here on the edge of my seat as the countdown continues for Nintendo’s newest rendition.

Pokemon X and Y, Nintendo’s sixth Pokemon generation, promise to be very exciting games.  Nintendo has already announced some of the game-changing (pft.  Oh puns…) features that will be introduced in X and Y; Mega Evolutions, Pokemon Amie, cusotmizable characters, being able to ride your Pokemon, being able to…..

Ok, I need to calm down.  Getting too excited.

But seriously guys, even if the Pokemon games aren’t your speed, you can still appreciate the changes.  Pokemon is a game that has honestly not had a lot of change since its debut.  Sure, they’ve introduced things like breeding, berries, musicals (I still can’t believe they brought in musicals), but a lot of these changes are nothing compared to what’s coming soon.  And I mean that in a good way.

So, if you have a second, please join me in my nerdy freakout and check out Pokemon X and Y’s official website.  It’s amazing to see what will be coming.  And I will continue to sit here wishing I could find a TARDIS to take me to Saturday, 10/12, at midnight.

@ultrasonic9 is back with a new article that touches on a lost arcade game of Nintendo’s-Radarscope. #Nintendo #RadarscopeArcade
Hey Arcaders! It’s Friday Night Are you tired of reality television Or another murder mystery?
Arcaders, which #pokemon game are you most excited about?
Join @raygunn1981 , @ubernerd527 , and @ultrasonic9 as they discuss the latest #nintendodirect and the upcoming #supernintendoworld at #universalstudiosjapan